Newcastle United are interested in Braga winger Roger Fernandes and are preparing an offer of €20m for him.

That’s according to A Bola, who say the Magpies are planning on ‘making a considerable investment’ in young talent around Europe, and Fernandes is ‘one of the targets’.

The 16-year-old made the step up to Braga’s first-team squad last year and made 25 appearances in all competitions last season, playing in the Europa League, Liga Portugal and several U23 competitions.

He signed a professional contract with Braga in November, but that has not slowed the number of interested parties.

The Portuguese side have already turned down proposals from Ajax and Borussia Dortmund, and now it is Newcastle’s turn to ‘position themselves’ in an attempt to secure his signature. 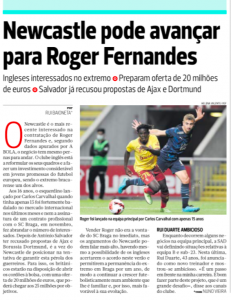 They’re ‘willing to open the purse strings’ and make an offer of €20m, which could reach €25m if certain targets are met.

Braga are not particularly interested in selling the youngster, but Newcastle’s arguments may ‘speak louder’ than previous proposals they’ve received.

There is also the possibility that Newcastle would sign the player and then allow the player to stay in Braga to continue his development in an environment where he is more comfortable.

Indeed, given it’s unlikely the player can move until he’s 18-years-of-age, that plan makes sense for everyone.