After a loan spell at Fulham last season, Paris Saint-Germain’s Alphonse Areola returned to England, when West Ham United took him on a temporary deal in the summer of 2021.

The goalkeeper has been restricted to a substitute role in the Premier League, resulting in just one appearance in the league this campaign. Łukasz Fabiański has been preferred ahead of him.

However, the Frenchman has been used in other competitions by David Moyes. He has featured 14 times in all competitions, during which time he conceded 11 goals and kept seven clean sheets.

The custodian’s contract at PSG lasts until 2023 and the next window will be the last chance for the Ligue 1 side to cash in from his sale. The Premier League side have an option to buy the 29-year-old after this campaign.

L’Equipe on Thursday explain that West Ham could be ‘tempted’ to exercise that option, 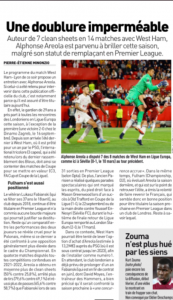 even though they plan to offer Fabiański [contract expires in June] a new deal.

The Hammers are not alone as Fulham have ‘positioned themselves’ for Areola.

According to the newspaper, the Cottagers have ‘expressed an interest’ in signing the keeper in the summer.

Areola seems to be in a ‘good position’ to continue in London next season. Whether it will be Fulham or West Ham remains to be seen.