As Fulham now enter the transfer window looking for reinforcements for their Premier League campaign, Marco Silva already has a target in his home country, according to reports from Portugal.

The outlet writes that Silva is fond of the player’s qualities and started making ‘precise observations’ over the player a long time ago.

Braga are said to be aware of Fulham’s interest, and since the likes of Benfica have been chasing the player as well, the Portuguese side are already preparing themselves for his potential departure this summer. 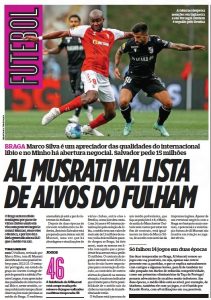 It’s said Al Musrati currently has a market value of €12m, and Braga are set to demand a little more, having his price tag at €15m.

His contract expires in 2024, and O Jogo claims that since there are no talks for a renewal, his exit from the club this summer is a real scenario.

Pointing out that according to reports from England, Fulham are also interested in signing Nemanja Matic from Manchester United, the newspaper claims that despite being more expensive, Al Musrati has the potential for a bigger market valuation in the future.