Sporting and Everton are set to start new talks for João Virgínia, according to reports from Portugal on Monday.

Following the loan spell the goalkeeper had in Lisbon this season, the Lions would now like to reach another agreement to keep him for longer.

Newspaper O Jogo today writes that Sporting and the Toffees have a meeting scheduled this week and that could be decisive for Virgínia’s future.

The Lions have a buying option worth €5m to sign the goalkeeper permanently, but they’ve been claiming this is too much. 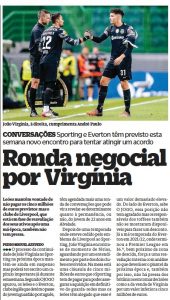 It turns out Everton are not willing to give a discount for Virgínia’s sale, and are in no hurry to let him go for less than that amount. So Sporting will need convincing arguments to reach a deal for the purchase.

At the weekend, manager Ruben Amorim spoke about the situation, and confirmed that they’ve been happy with the season the goalkeeper just had in Lisbon.

“We’re very happy and he played more at Sporting than at Everton,” said the coach (via Jornal de Notícias).

Now they need to pay up if they want to keep him.