Just under a week ago we covered claims from Belgium that Fulham were working on the exit of Denis Odoi, despite him being a well used part of the club’s squad during the last Championship season.

Despite Slavisa Jokanovic using the player, it was claimed the manager and Fulham were ready to see Odoi go, and had even contacted Gent to try and propose a sale during the next transfer window.

The idea suited Gent perfectly, but it was still early days.

Things have moved on quite quickly according to Het Nieuwsblad, with them reporting a deal is now much closer to actually happening. 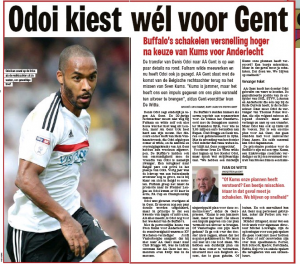 Another Belgian newspaper, HLN, back that up, and say Odoi has again visited Gent, after having initial positive talks with the club.

The only thing missing now is an agreement between Fulham and Gent, but given that both clubs are keen that shouldn’t be too hard to arrange.