Manchester United fans may remember that, less than a couple of weeks ago, the club were strongly linked with signing Arnau Puigmal. The Espanyol youth player was said to be a ‘pearl’ of his club’s quarry, but Manchester United interest had turned the player’s head.

There’s been no update on that, but now Manchester United are linked with another ‘pearl’. Mundo Deportivo reports the club are also ‘close’ to signing Roberto Gonzalez from Real Betis.

The Spanish side of the reporting, covered in more detail by ABC Sevilla, says Manchester 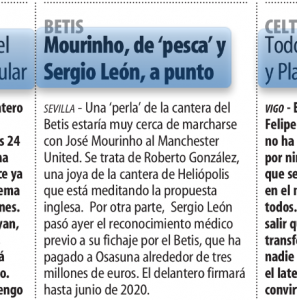 United interest is true, but insinuates claims of a deal almost being done, or even already done, for the youngster, as pushed in England, are wide of the mark.

Jose Mourinho’s coaches have requested Betis allow the player to train at Carrington, so Manchester United can get a better look, and so the can convince him. The idea is to roll out the red carpet, and, as long as he impresses as expected, secure the youngster.

However, it’s made clear that no agreement has been formalised whatsoever so far.

Spanish youth systems are often referred to as quarries, like a mine of talent. So when a brilliant prospect is found, the young footballer is usually labelled a ‘pearl’.

Manchester United ‘interested’ in Colombian striker – Described as a player...