Fulham have reportedly lowered their asking price for Jean Michael Seri, but Galatasaray are prepared to wait until the end of the season, say Turkish newspaper Fotomac.

The Ivorian midfielder has been an important member of Fatih Terim’s team, and his performances have been very impressive since the start of the second half of the season.

Before the Turkish Super Lig stopped due to the Covid-19 outbreak, Seri was a key player for Gala and Fotomac report the Turkish champions want to keep him in the squad.

According to Fotomac, Fulham have dropped their asking price for Seri to €10m and informed Galatasaray. However, it’s claimed Gala haven’t yet entered into transfer talks but are likely to make their move in the summer. 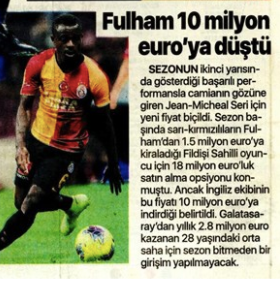 Seri is said to be keen on staying in Istanbul , however, the 28 year old’s future depends on future talks between the two clubs.

He’s made 29 appearances this season and scored one goal. His contract at Craven Cottage will expire at the end of June 2022.