Turkish newspaper Star claim Fulham are still in the race to sign Besiktas defender Domagoj Vida but Italian giants Roma and Inter Milan have edged ahead of them to land the Croatia international.

Yesterday we covered a report saying Vida had this week been offered to Fulham, with Claudio Ranieri looking to bolster his defensive options in this window. The player has been receiving reported interest from the Premier League ever since helping his country to last summer’s World Cup final.

In recent weeks it’s been reported Besiktas could sell Vida to ease their financial situation and Star say the Istanbul side club are ready to part ways if any of the interested clubs match their valuation. 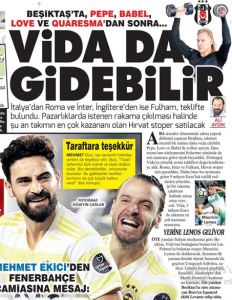 It’s reported Besiktas are close to signing Mauricio Lemos as a replacement for Vida and that Fulham, Inter Milan and Roma are all interested in signing the 28 year old defender.

Vida is currently the highest earning player in the Besiktas squad and the Turkish club are hoping to get him off their wage bill.