Home Europe As it stands, Newcastle can talk with Benitez target in January, negotiations...
SHARE

Wanting to sign a versatile forward for Newcastle, one capable of either playing down the wings or through the middle, Rafa Benitez’s first port of call was Nicolas Pépé.

Unfortunately for him, that never materialised, and the then Angers forward ended up signing for Lille, meaning the attention quickly turned to the alternative: Jonathan Bamba.

The Saint-Etienne forward was linked quite a few times with Newcastle over the course of the summer, but new manager Oscar Garcia seemed keen to make the 21-year-old a key part of the team, and the youngster stepped up.

Vital in his side’s good start to the season, Bamba, whose contract is due to expire at the end of the season, wanted a wage reflecting his importance to the side, and that’s where the problems started.

Desiring a salary three times higher than what Saint-Etienne were prepared to offer him, the forward’s insistence in the matter forced the Ligue 1 club to freeze him out of the first-team for the past two games, which was a good sign for Newcastle. 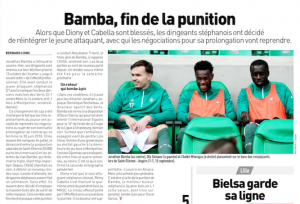 After all, the longer he stayed out, the likelier he was to run down his contract, allowing him to speak to other clubs about a free transfer in January.

However, according to L’Equipe on Tuesday, it seems the inability to play quickly got to Bamba and his brother (also his agent), with new renewal talks now planned in the near future.

Of course, that doesn’t mean an agreement will be reached, and there’s every chance Newcastle could get their chance to talk to the 21-year-old in January.

It’s something the club will undoubtedly be monitoring rather closely.