Newcastle United and Crystal Palace are both interested in Jonathan Bamba, report L’Equipe in their Saturday edition. And both clubs sent representatives to scout the player last weekend.

Newcastle have been linked with Bamba all summer, and earlier in the window there was even talk of an offer arriving from St James’ Park. Werder Bremen were said to have bid €4m for the Saint Etienne player, but that didn’t get them anywhere close to a deal.

Atalanta have also been credited with interest in the player, at the end of July with Newcastle once again thrown in, but Crystal Palace haven’t been part of the chasing group.

As well as Newcastle and Crystal Palace, L’Equipe throw in AC Milan, FC Porto, and Sevilla. One would think that if any of these clubs really wanted Bamba, with the price estimated at €5m, then they’d already have him. 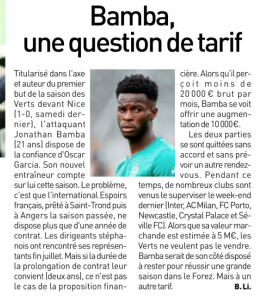 L’Equipe’s claim about the player’s contract may give a clue to what’s really going on here.

Bamba, 21 years of age, has a year left on his Saint Etienne contract, and isn’t against a renewal. However, he wants more money than has already been offered, and the situation drags on.

Interest from Newcastle, Crystal Palace, and all the other clubs is no doubt useful in negotiations.