Barcelona paid a club-record fee to sign Philippe Coutinho from Liverpool in January 2018.

Having failed to impress, the La Liga winners allowed the Brazilian to join Bayern Munich on a loan deal with an option to make the transfer permanent.

The 27-year-old has enjoyed a ‘good start’ to the season, with two goals and three assists in first eight appearances for the Bavarian club.

AS claims the player went to Munich without a return ticket and despite him being on the right track to regain his form, the Catalan club’s plan for Coutinho is to not to wear Barcelona shirt again.

The two clubs agreed to set a purchase option at €120m, but the report adds the Spanish champions and the Bundesliga winners could sit down to ‘clarify the terms of the agreement’. 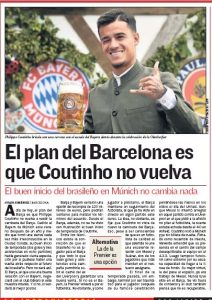 Even if Coutinho manages to gather more goals and assists this season, Barcelona’s idea is to sell him. They are clear if it’s ‘not Bayern’, then the Camp Nou side will sell him to the highest bidder.

AS states the Premier League could be an option if Bayern decide against exercising the option to make Coutinho’s loan deal permanent.