As France Football features some transfer news today, they have something to say on the future of Juventus star Paulo Dybala.

According to the magazine, the Argentine striker is one of the players who the Old Lady could offload this summer in order to buy someone else.

Speaking of the clubs who could sign the 27-year-old, the outlet names Chelsea and Tottenham Hotspur as potential contenders.

France Fotball says Spurs and the Blues ‘would be willing’ to spend between €50m and €55m to have Dybala. 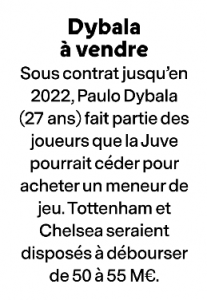 The report also points out that Dybala’s contract with Juventus expires in 2022, so this is obviously a decisive summer in case the Old Lady plan to make some cash with his sale.

With only three goals and two assists in 16 appearances this season, the striker hasn’t featured since January due to a ligament injury.

The Argentina international is one of the players who’s often seen involved in big rumours in the transfer market, and has been many times linked to Tottenham for the past couple of years. This time, perhaps the interest from Chelsea could now accelerate his move to London, regardless of which club he’d be heading to.