As big stories go and big claims go, what Le Parisien published on Tuesday is up there.

According to the French newspaper, six teams are ‘regularly sounding out’ the entourages of both Neymar and Kylian Mbappé: Juventus, Barcelona, Real Madrid, Manchester City, Chelsea and Liverpool.

That means all six are keen on both players, yet, when it comes to the Brazilian, the level of interest does vary more than the young Frenchman, who is a forward anyone would want on their team.

The pair are good friends at Paris Saint-Germain, and that chemistry is showing on the pitch, so separating them is something the Ligue 1 leaders would want to avoid if they can, knowing full well that having both around gives them a far better chance of finally winning the Champions League.

As for whether Manchester City, Chelsea and Liverpool can afford them, that isn’t discussed, but with the money currently floating around the Premier League, you’d expect them to at least have the cash somewhere down the back of their plush sofa to get one of the two if they really wanted him. 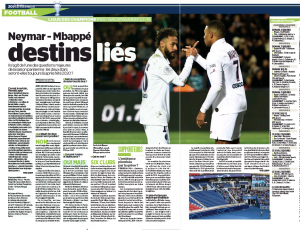 Realistically, it just sounds like those in charge of transfers at the Etihad, Stamford Bridge and Anfield are merely keeping tabs on Neymar’s and Mbappé’s current situation, just in case, maybe, a small desire to leave appears and they decide to try something new.

In the meantime, Paris Saint-Germain are trying to ward off the interest by handing the Frenchman a very large contract, but he has yet to sign it.

Either way, fans of Manchester City, Chelsea and Liverpool, it’s always nice to know your clubs are aiming high.

Uncertainty over Wolves transfer despite claims of agreement – Worry it...

Club likley to offer €8m for Southampton player – Half the...