Home Europe Club have Everton player ‘in their sights’ for January – ‘Aiming’ to...
SHARE

Roma sporting director Gianluca Petrachi is working on signing a striker in the January transfer window and has Everton’s Moise Kean ‘in their sights’.

Kean joined Goodison Park in the summer transfer window, with the Blues pulling off something of a coup to secure him from Juventus.

His time in England has not been a happy one so far, though, as he’s gone 13 games in all competitions without a goal to date.

The lack of goals and regular playing time at Goodison Park has led to suggestions he could head back to Italy in January, with agent Mino Raiola thought to be working hard to make a deal happen.

Roma are one of the sides to have been regularly linked, and Il Messaggero confirm that the Serie A side are keen.

They say that Roma chief Petrachi is keen to add a striker to the squad in the winter window as they need a player who can back up Edin Džeko but also play alongside him.

Kean is a player they have identified could do both, and they are ‘aiming’ to try and get a loan deal done at this moment in time.

Kean ‘doesn’t feel well’ at Everton has ‘a desire to return to Italy’, and Roma could be his opportunity to ‘find continuity’ and force his way back into Roberto Mancini’s plans for Euro 2020. 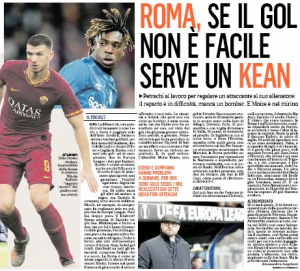 Everton’s stance isn’t mentioned, although it is suggested the ‘do not feel well’ with the young striker either.

It seems unlikely they would be willing to give up on Kean quite so quickly, though, especially given the effort they spent to sign him this summer.

There’s also the case of their managerial situation.

Marco Silva’s replacement may decide to give Kean the playing time he craves, and if he flourishes, that should see him head to the Euros.

As such, until the manager spot is filled, it’s unlikely Everton will be deciding on whether Kean stays or goes in January.

Club’s Head of Communication explains Wolves deal is ‘stuck’ – Nothing...