Manchester United are featured in pretty much every French story about PSG’s summer transfer.

Being knocked out of the Champions League by the Premier League club has scarred PSG, and it’s still endlessly talked about. Seen as a disaster, it’s that event which overrides all the transfer thinking at the Ligue 1 champions.

Similarly, most articles about Presnel Kimpembe also mention Manchester United, going over his part in the fateful night. It’s even put doubt around his future with the club.

Now France Football managed to package it all together and link the defender with a move to Old Trafford. Both United and Arsenal are said to have asked for information about the potential signing, initiating contact, with Unai Emery’s club holding him in ‘high esteem’. 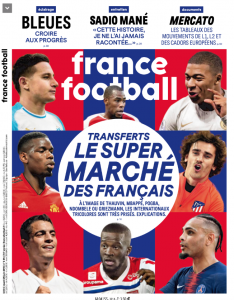 Right now he’s not especially keen on a transfer, but it is stated he sees playing in England as part of his career plan.

The 23 year old has a contract lasting until 2023, so PSG could make some good money. There’s no suggestion of a transfer amount, but it could rule Arsenal out.