Of all the forwards Fulham have been linked with over the past year, and let’s face it there’s been many, one which sounded a promising track, and so different from others, was Diego Rolan.

Towards the end of June, around the time a Fulham offer was claimed, Bordeaux president Stéphane Martin confirmed approaches but wouldn’t specifically name the London club.

Since then things have crept along, but Friday’s edition of L’Equipe explains a significant step forward, and maybe one back too.

First the good news. L’Equipe say Fulham and Bordeaux were last night in the process of finalising a €10m transfer for Rolan. 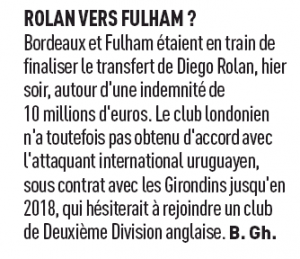 Now the bad news. Despite getting almost to the point of closure with Bordeaux, Fulham haven’t agreed personal terms with Rolan. He’s said to be hesitant to join a Championship club.

If that hesitance can be overcome with a nice big salary and promises of the bright lights of the Premier League then Fulham have a reasonable chance.