If you are to take the words of Arkadiusz Milik’s agent seriously, the striker is likely to renew his contract at Napoli.

The Poland international’s representative recently admitted being in contact with Cristiano Giuntoli, the Serie A club’s director of football, about a contract extension and stated they would sit down after the Covid-19 pandemic to try and sort something out.

However, there remains interest from two Premier League clubs (West Ham and Tottenham), according to Corriere dello Sport, that could change the player’s mind.

At least, that’s what they allude to when they say England’s top-tier is a ‘universe that fascinates’ the Napoli forward, who has ‘had the chance’ of being informed of the Hammers’ ‘attentions’.

Not only that, but they also hint he could ‘take up’ the role for the post-Harry Kane at Spurs should the England international, for some unknown reason, be sold. 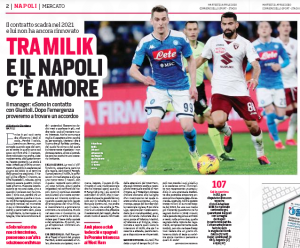 There’s also interest from La Liga, with Atlético Madrid, Sevilla or even Valencia all having a look at him, while it’s Schalke 04, Borussia Dortmund and RB Leipzig in Germany.

A long list of suitors, meaning West Ham and Tottenham would have to be convincing, but with Premier League funding behind them, anything is possible.

Still, it seems the first option would be to stay at Napoli.

If no agreement is found, however…