One of the more notable transfer moves in the Premier League so far this summer was Pablo Fornals move to West Ham.

The Hammers moved quickly to sign the Villarreal man, paying €27m for his services and getting the deal done before the U21 Euros.

That proved to be a smart move as Fornals went on to play a vital role in Spain’s success at the tournament, which would have only added to his price tag.

There’s been plenty of excitement at the London Stadium about their new recruit and, in an interview with Marca, he explained he’s excited about the move himself and particularly the chance to work under Manuel Pellegrini.

“I appreciate that West Ham has bet again for me,” he says.

“In addition, now I can work with one of the best technicians in the world.”

“I’m also excited to be able to live in London and learn a new culture, it’s a bunch of things that made me decide to go there, I hope my family and I adapt quickly.” 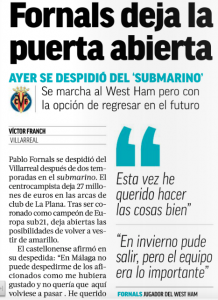 Despite the lure of the Premier League, leaving Villarreal was a wrench for Fornals given the enjoyable time he experienced with the club.

He made just under 100 appearances for the club in two seasons, scoring nine goals and registering 19 assists in total, becoming a key player and fan favourite in that time.

The La Liga club were not happy to see him leave, by any means, and Fornals explains he tried to go in a manner that didn’t make it impossible for him to return in future.

“In Malaga, I can not say goodbye to the fans as I would have liked,” he adds.

“I did not want it to happen again here. I wanted to do it well and leave the door open and why not to be able to return in the future.”

Director in ‘constant contact’ with Manchester United – Trying to convince...