Home Europe Former Tottenham trialist could be rewarded with €10m move to Newcastle or...
SHARE

Adama Diakhaby came through the youth system with Caen, but in 2014 he decided not to accept a three year contract from the club.

That led to a tour around Europe, going through trials at several clubs, including Tottenham Hotspur. Diakhaby didn’t do enough to convince Tottenham to give him a contract, and eventually ended up at Rennes, where he had to fight his way through the ranks.

Diakhaby has probably proved Tottenham and others wrong, and he’s shown a great attitude which leaves him on the verge of a relatively big money transfer. Newcastle United have been linked at several points during the summer, and on Wednesday L’Equipe again mention Rafael Benitez’s side. 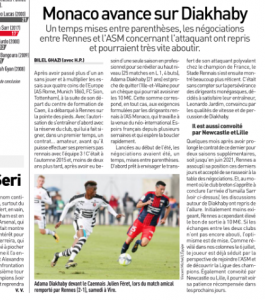 The French newspaper say Diakhaby is close to leaving Rennes for around €10m. AS Monaco are pushing ahead, but Newcastle and Lille are also keen.

Diakhaby himself is seduced by the idea of signing for Monaco and playing in the Champions League.

In a year’s time, perhaps the 21 year old will be linked with Tottenham in a huge money deal, Daniel Levy would love that.