Since Sergio Romero left Manchester United to join the Argentine national team in the United States, he already knew he wasn’t going to play.

The goalkeeper is still recoverying from a knee injury, and was called up in the international break to be a ‘leader’ in the squad, mostly because of the absence of stars like Messi and Aguero.

Romero enjoyed the trip with his compatriots, and had the chance to meet Maxi Moralez, who had been his teammate at Racing over ten years ago.

Moralez was interviewed by Argentine newspaper Olé, and even though the chat had several subjects, the headline is about the chance of playing with Romero again in the future. 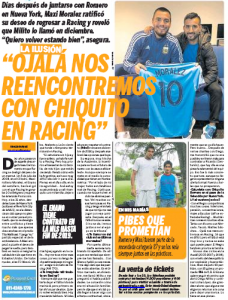 “I’ve shared many things with him. Academy, pension, concentrations, trips to Escobar… Many things in many years,” Moralez told Olé.

“Both with him and with Mercado, Yacob, Matías Sánchez… I hope we meet again at Racing. I know it it’s difficult, but football is very crazy and you never know what can happen. Romero also prioritises the family.”

The Argentine media often links Sergio Romero with a return to the country, especially because he hasn’t been playing regularly in Europe.

Local outlets used to say he should be back to the country so he wouldn’t be left out of the World Cup, but he stayed, and is still being called up as the number one despite being a distant second choice at Manchester United. So it seems he’s only going back in case he really decides that time has come.