Bebé. How could we possibly forget him? Signed by Manchester United in a mysterious £8m transfer in 2010, the Portuguese winger caught the attention.

It didn’t quite work out for him at Manchester United, from where he was loaned out several times. In 2014, Bebé was sold to Benfica, Manchester United’s opponents tonight in the Champions League.

Portuguese newspaper Record have spoken to Bebé, as a man who knows both clubs well, and he claims the Eagles have all the conditions to get an away victory at Old Trafford.

“I believe that Benfica have the capacity to win,” Bebé told Record. “It will be very difficult because Manchester United are very strong and have made good games at home. They are in a good moment, unlike Benfica. But Rui Vitoria has a good team and can win at Old Trafford.

“Playing in the Champions League at Old Trafford is different, of course. The stadium atmosphere is very good, the supporters are always supportive of the team and they give confidence to the players. It’s a ground where all players dream of playing one day.”

Asked about the Manchester United players who are a threat for Benfica, Bebé said: “At Manchester United it is difficult to choose because anyone can decide the game. Lukaku, at the front is very strong and has scored many goals. There is still Martial, who also unbalances a lot, and Mata.

“Matic brings the midfield to life and Herrera and Fellaini have also been doing very well. It will be an interesting game, calmer for Manchester United and more difficult for Benfica, who will have to attack to leave with points.” 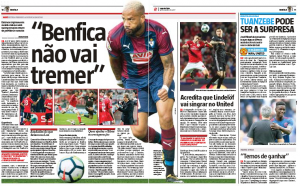 Bebé was also asked about Victor Lindelof, who he says that will still succeed at Old Trafford: “He is, without a doubt, a great player. He’ll get his place in the team. It’s going to be difficult but he will.”

Finally, the player had a say on his own time at the Premier League club: “About Manchester United I don’t have much to say except that it was a good experience. I was very young and I can say that maybe I didn’t go at the right time. But things are like that and we have to take the opportunities. Life goes on, but if it was now it would be different, for sure.

“I am already grown up and the way of playing is completely different. I played for Manchester United without any pressure because I just wanted to enjoy football, as I do today. I just had to be happy.”