Home Premier League Arsenal “I was and still am an Arsenal fan” – Udinese midfielder eyes...
SHARE

Bought from Slavia Prague in July for just under £3m, Antonin Barak didn’t take long to establish himself as a regular starter for Udinese.

Joining his international teammate Jakub Jankto at the Serie A club, the 22-year-old has scored two goals in nine appearances this season, and is hoping he’s impressing enough to one day get his dream move, which involves Arsenal.

Speaking to Gazzetta dello Sport on Tuesday, the attacking midfielder revealed his love for football started with the Gunners, with one man in particular.

He said: “I was and still am an Arsenal fan. I went crazy for Thierry Henry. These days, I watch Andrés Iniesta for his vision and first touch.” 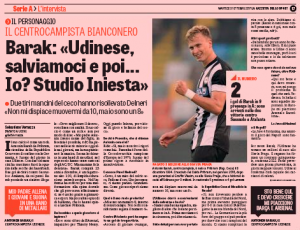 Of course, it seems unlikely that Arsenal and Arsène Wenger would make a move for him so soon after his arrival in Italy, yet we’re pretty sure they’ll know all about him from their time looking at Jakub Jankto, who has been described for a while as a long-term target for the French manager.

As for Barak himself, the Udinese new starlet knows full well it won’t be easy to get a move to a bigger club in the future.

He said: “I know that I need to develop, and it doesn’t bother me where I end up. We’ll see. In Italy, there are a lot of important team. In Europe, Arsenal and Barcelona appeal to me.”

It would be a bit weird, after all, if he was a Gunners’ fan and didn’t have aspirations of playing at the Emirates one day.

Maybe he will, maybe he won’t, but there’s no harm in dreaming big, especially if you have the talent to back it up.