Poor Alexandre Pato. The former Chelsea player agreed to give an interview to Marca, probably not being aware the Spanish newspaper would be mainly interested in his opinion on Diego Costa moving to China.

Chelsea’s Costa was strongly linked with a move to China over the winter, but an exit was unlikely given the club’s position at the top of the Premier League table. Costa has been a warrior for Antonio Conte but has never seemed fully settled since his move from Atletico Madrid and a transfer in the summer, when Chelsea can find a worthy replacement, would surprise nobody.

Marca put it to Tianjin Quanjian forward Pato that Diego Costa could be his partner next season: “I became a partner of Diego Costa at Chelsea. He could help a lot. We do not 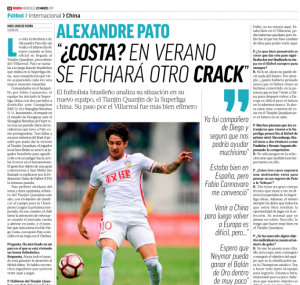 know anything, but I know for sure this summer we will sign a major player, high level.”

The Spanish newspaper then pressed if that meant Costa was arriving, and Pato replied: “I don’t know. I limit myself to playing. It’s Fabio Cannavaro who deals with these things, along with the president. I am sincere in this.”

Costa possibly moving to China to join Pato is the headline Marca are taking from the story and rumours surrounding the Chelsea striker look set to continue.