Home Europe Everton set to be in middle of transfer ‘soap opera’, with TV...
SHARE

Everton are one of the clubs set to be in the middle of this year’s transfer soap opera, believe Spanish newspaper Marca. AS Monaco right now look to be the centre of the summer’s possible business, but Marca believe several other clubs are in real danger of seeing their star player, or players, leave the club.

First up for the Spanish newspaper is Juventus, with both Barcelona and Real Madrid repeatedly linked to Paulo Dybala. Then comes Everton, and Romelu Lukaku’s refusal to renew, at least up to now, is creating waves around Europe.

Borussia Dortmund’s worry this year is Pierre-Emerick Aubameyang, Lyon could be set to lose Alexandre Lacazette, and Hector Bellerin’s Arsenal future is questonable, according to Marca.

It’s pointed out that Premier League wealth from TV money will play a big part in the summer business, which creates an interesting situation at Everton. Lukaku’s current contract runs until 2019, so there’s no immediate panic at Everton. 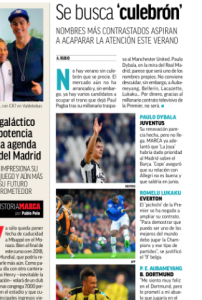 market, and may restrict possible destinations to the Premier League, as long as PSG is discarded.

Real Madrid and Barcelona are hardly likely to pay Everton’s asking price, and there’s a lack of the needed funds elsewhere in Spain. In Italy Juventus have only recently spent a great deal on Gonzalo Higuain, and whilst there may be noises about big bucks coming to the surface in Milan, that’s being going on for some time with little actual progress.

If Everton are set for a ‘soap opera’, as Marca believe, then it could be a very English one.