There’s good news for Arsenal if their interest in two Porto players is as concrete as the Portuguese press would have one believe.

As reported by the Portuguese media last weekend, the Gunners have been watching midfielder Danilo and striker André Silva, and scouted them in the match against Paços de Ferreira.

Now in a story from Correio da Manhã today, it’s claimed these two players are on a list of those who Porto would be relying on to make some money in the summer window.

The Portuguese side actually hoped that Danilo, Yacine Brahimi and André Silva would shine more this season, especially because the intention was to make €115m in the summer.

But things didn’t happen as expected, with André Silva even going to the bench in the recent fixtures. Porto would still be trying to sell them, especially in Silva’s case, as he’s been succeeding in the national team and has Jorge Mendes by his 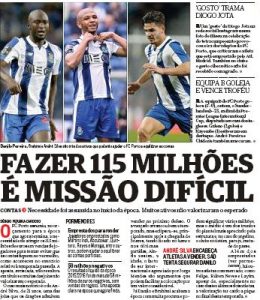 side to get a good fee.

Danilo is described as someone who could make ‘many millions’ for the club, even though he’s seen as an important piece of the team.

Each of them has a €60m release clause, but in case the competition doesn’t become bigger and Porto see themselves forced to sell, there’s a huge chance that Arsenal could get a reasonable discount.

Over to you, Arsene Wenger.