Arsenal and Man United scouts are highlighted as newspaper A Bola lists all the emissaries who watched Porto beating Paços Ferreira 4-1 in the Portuguese league on Sunday.

A Bola claims it’s very likely Arsenal officials were there to watch Danilo and André Silva, since both of them have been linked to the club. However, neither managed to start the match.

At least the duo had the chance to play for a few minutes, and ended up doing well. midfielder Danilo, who’s returning from a knee injury, didn’t have much to worry about and played in a more advanced position just to get some game time.

Silva, a striker, who’s been recently dropped to the bench, managed to score from a penalty, tried a few shots and was described by newspaper O Jogo as “energetic” and “with will to dispute every challenge as if it was his 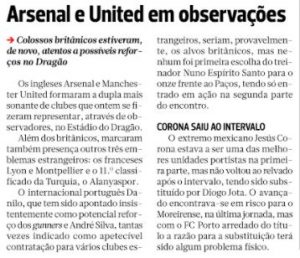 Both Danilo and André Silva have release clauses of €60m.

Although the links between them and Arsenal haven’t been strong lately, these are two names who will certainly attract some interest in the transfer window.

Porto would push for as close to the clauses as possible, at least publicly, but Arsenal could likely get themselves a big discount if prepared to pay the majority of any transfer fee in one go.