Liverpool winger Rafael Camacho is set to start deciding his future this week, according to reports from the Portuguese media today.

Newspaper Record writes that the player’s father and agent, Euclides Camacho, is set to meet both Benfica and Sporting in the coming days.

The 18-year-old wants to leave Anfield to play more, and expects his departure to be sorted ‘in the coming weeks’, the outlet says.

Liverpool are said to be willing to give Camacho a new contract, extending the one which expires in 2020. However, they already promised him more playing time back in January, when blocking his loan to Sporting, but Jurgen Klopp didn’t keep his word. 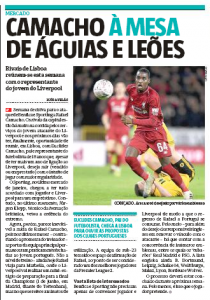 Now the Lisbon rivals both want the signing, regardless of getting him on a permanent deal or even on a loan.