Schalke is a frustrating club, even for those who don’t support the German side, so for those with an emotional interest it’s obviously a difficult follow.

There’s often some kind of crisis at the club and a whole series of people ready to throw others under the bus to save themselves. Christian Heidel was brought in as a general manager to help get the club back where they belong but it’s fair to say he hasn’t exactly been a runaway success.

Last season there was clearly a series of calculated media leaks to save Heidel’s bacon, and it worked. Now he’s under more pressure to show a long term vision and real progress rather than yo-yoing up and down the Bundesliga.

Speaking to German magazine SportBild, Heidel was asked why Schalke let fan favourite Sead Kolasinac join Arsenal for free in the summer, without perhaps the strongest attempt at a contract renewal.

Heidel, fittingly, appeared to blamed Kolasinac for asking for too much: “An extension with Seo was not economically justifiable. I have a sporting and an economic responsibility. A populist act, only to avoid possible criticism, would be strange to me.” 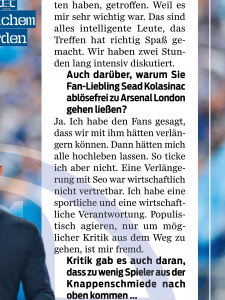 It certainly wasn’t all about money for Kolasinac, and not even about joining a big club like Arsenal. The atmosphere at Schalke had become toxic, with players often sacrificed to the press in order to swerve blame away from others.

With Kolasinac’s contract ending, the strong minded footballer was hardly going to continue with the Schalke status quo, with even Arsenal’s constant stresses under Arsene Wenger seeming more attractive.