On Tuesday, we had a continuation of what was becoming a bit of a surprising saga: a return to Italy for Leicester City’s Dennis Praet.

The midfielder moved to the King Power Stadium this summer from Sampdoria in exchange for £19m, yet he has struggled, at least so far, to break into Brendan Rodgers’ first-team regularly.

This led to claims Fiorentina were interested in bringing him back to Italy, and Corriere dello Sport stated Daniele Pradè, the club’s DoF, would ‘try to get’ Praet, feeling he had the right ‘attributes’ to help the Serie A club.

All of this, however, has now been dismissed by none other than the player himself in an interview with Gazzetta dello Sport. 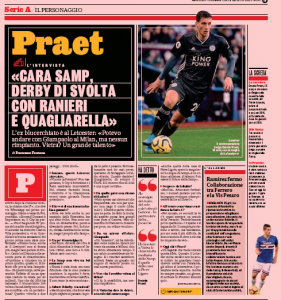 Asked about a return to Italy, he said: “It’s false. I’ve read, for example, about Fiorentina, but I’m happy. I’m not a regular starter yet, but I’m aiming to be soon. Then again, in the future, maybe: it would be nice to return, maybe even to Sampdoria”.

Of course, he doesn’t mean anytime soon by that, so Leicester fans don’t have to worry too much, especially since it’s very unlikely his former Serie A side can afford him these days.

For now, he’s happy in England, and he wants to be a regular starter under Rodgers, and that’s all there is to it.