There’s been a growing number of reports over the past week that Fiorentina like Leicester City’s Dennis Praet and a move could be made in January.

The Belgian only moved to King Power Stadium from Sampdoria in the summer, and while he has played a bit, he hasn’t been a regular starter under Brendan Rodgers, with just 14 appearances in all competitions so far.

Only six of those have been starts, and you could argue Leicester are just allowing Praet to acclimatise to his new surroundings and a new type of football, but Fiorentina are lurking and a move is being readied.

That’s what Corriere dello Sport are claiming on Tuesday, as their director of football Daniele Pradè, who signed the Belgian for Sampdoria in 2016, is preparing the January transfer window.

Both Dennis Praet and Inter’s Matteo Politano are ‘strong but extremely onerous targets’ for the club, with the Leicester man having the ‘characteristics that could go very well with the purple club’. 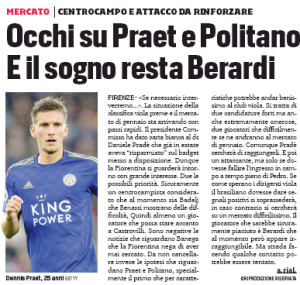 Despite the price tags likely to come attached with both players, Corriere points out Pradè will ‘try to get to them’.

There’s no mention of what fee would be needed to convince Leicester, but considering the Premier League side spent £19m on him in the summer, they won’t want anything less, and are likely to ask for a whole lot more.