When Viktor Fischer signed for Middlesbrough, the transfer raised eyebrows around Europe. Fischer had long been regarded as a great young Danish talent and whilst injuries had interrupted his progress at Ajax, now fully fit he was ready to get things back on track.

Unfortunately, for club and player, Middlesbrough didn’t really seem to have a plan specifically for Fischer. Expecting the 22 year old to bounce in and immediately hit the ground running, firing the goals to keep Middlesbrough up, was unrealistic and naive.

Good management and handling of the player was needed, but it seems, from the outside at least, that Middlesbrough weren’t entirely sure what they were getting or what their plan was to get the most out of Fischer.

It all went wrong, and Fischer had a nightmare season, with Middlesbrough relegated.

Now the player looks to the future. Danish newspaper Ekstra Bladet believe Fischer has two options. Stay at Middlesbrough and hope for more games in the Championship, or move to another club, likely in the Netherlands, and try and get his career back on track. 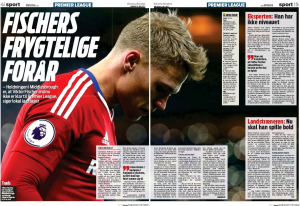 Denmark manager Åge Hareide is quoted as saying: “I hope Viktor can soon come to play regularly so that he again will be relevant for the national team. Whether it be in Middlesbrough or somewhere else, I cannot say.

“It is very important to him at the age of 22 years, that he soon comes to playing regularly. Viktor Fischer’s talent is indisputable, but it takes that he often plays to continue his footballing development.”