Moise Kean may continue to be heavily linked to a move to Everton, but the Toffees will certainly have a hard job to land the youngster.

It’s claimed the Dutch side have the striker as a target, and that could give the Old Lady an advantage in the race for the defender.

Juventus rate Kean very highly. It’s said they’ve already rejected an offer of €30m from Everton, and are working to extend his contract at the club.

This is now the third time an Everton offer has been reported, and it’s from different sources. 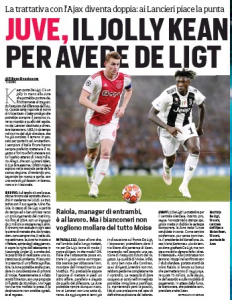 Even in case Juve send Kean to Ajax in order to land De Ligt, they would be thinking of adding a buy back clause, just in case the striker ends up reaching all of his potential.

That’s why Everton’s chances to land him don’t look so big now, unless they come up with an offer which Juve really can’t refuse.