Transfer season is well and truly upon us, and Everton appear to be hard at work working out who to submit offers for.

On Saturday we covered claims from Portugal that the Toffees had an official at the match between Benfica and Santa Clara.

As expected, the Lisbon club won the match, with an impressive 4-1 scoreline.

Haris Seferović is declared man of the match by much of the Portuguese media today, and he’s the league’s top scorer having found the back of the net 23 times.

That match wasn’t the only one of interest to Everton this weekend, with O Jogo reporting they were also at Porto v Sporting, which the former won 2-1. 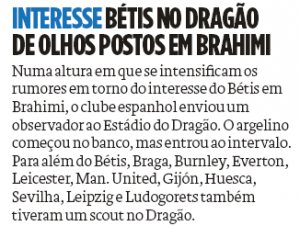 The most obvious link to make here is Yacine Brahimi.

Everton have been linked for years, with it being stated recently he could be waiting for them to make an offer.

His contract expires next month, and therefore he’d be available on a free transfer.