Home Europe Player waiting for ‘better offers’, one could arrive from Everton, Toffees in...
SHARE

The race for the Porto winger Yacine Brahimi is only expected to get bigger before the end of the season.

With the player’s contract with the Dragons expiring this summer, there’s a lot of interest in whether he’ll renew or leave.

Newspaper A Bola reports today that the Portuguese side are pretty keen on extending Brahimi’s contract, but they are not really interested in giving him the pay rise he’s asking for.

That’s why the outlet says Brahimi is waiting for a ‘better offer’, and that could come from Porto or from any other club. Everton are named as one of the clubs who have been linked to Brahimi lately, even though there’s no mention of an offer from the Toffees. 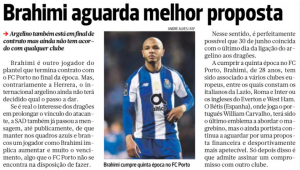 Everton have been linked for some time and now would be the point they’d need to do something about their interest, if it’s as real as has been presented.

A Bola says that Real Bétis have tried to sign him, but the winger is waiting for a better option, both in terms of competitiveness as financially.