You might have heard the transfer whispers being shouted out from every rooftop over the past few months that Everton have held an interest in signing Denzel Dumfries from PSV.

The general consensus was that this was a Marcel Brands decision, with a need at right-back clear for all to see, and so a pursuit began.

However, limited funds and FFP regulations seemingly forced the Toffees to put that particular deal to the side, and now a claim has emerged in Italy that they have pulled out altogether.

That’s according to Gazzetta dello Sport, who report on Monday that Everton have ‘withdrawn from the race’ to sign Dumfries, especially after the player asked his agent, Mino Raiola, to favour a move to Inter because their interest ‘obviously stimulates him’. 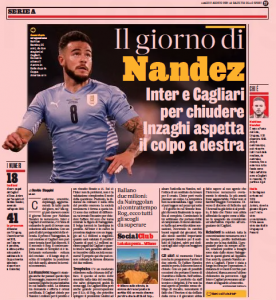 The Serie A side had been providing Rafa Benitez’s side with the most competition for the Netherlands international, and it appears their recent Italian title and Champions League status has favoured them.

Whether Everton have pulled out for good or just temporarily while they find the funds to sign him remains to be seen, but the feeling in Italy is that Inter have a clearer path to his signing for now.