While Sheffield United aren’t often linked with that many players abroad, there are some foreign clubs taking an interest in some members of the Blades squad.

Top of the pile, as you might have guessed, is Sander Berge, whose signing was unable to stop the club from being relegated back down to the Championship last season.

The Norway international has been of interest for some time to Napoli, and their director of football is ‘optimistic’ about signing the defensive midfielder.

That’s according to Gazzetta dello Sport, who explain Berge is expected to be the player who ‘should support Fabian Ruiz in the middle of the pitch’, suggesting some confidence a deal with Sheffield United can get done. 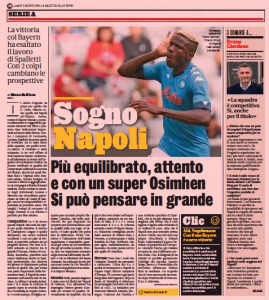 In fact, it’s made clear the Norwegian’s purchase has ‘become even more necessary’ ever since Diego Demme was ruled out until the end of September at the earliest with a medial collateral ligament knee injury.

There’s no indication of how much Berge would cost Napoli, but it’s clear Sheffield United, protected by his 2024 contract, won’t be making any presents.