Bordeaux’s current owners, the M6 Group, are edging closer towards selling the club to American investors.

Today’s edition of French newspaper L’Equipe claims in the next 10 days we should find out if the current owners will continue managing the club or if the Ligue 1 outfit be under the management of the new owners.

The French side are planning to place a few of their players on the transfer market. The list includes Malcom, who was heavily linked with a move to the Premier League in January, mainly with Tottenham. The Brazilian continues to attract interest from England and Italy.

From Italy, Inter Milan wanted to sign Malcom on loan, with an option to sign him on a permanent deal for a fee between €25m to €30m. Bordeaux rejected the Nereazzurri’s 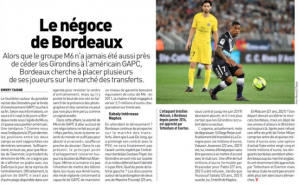 approach and they ‘expect a lot’ from the English market for Malcom.

Tottenham Hotspur and Everton ‘have approached’ Bordeuax for Malcom recently, but the two clubs are yet to step up their efforts in signing the 21-year-old. The South American has scored 12 goals and registered seven assists in the league last season.

It sounds very much like Bordeaux are looking towards the Premier League and would encourage the interest from Everton and Spurs, the old €40m asking price may also come down a little for a straight transfer.