Following all the stories saying Everton were chasing Porto striker Luis Diaz towards the end of the summer window, we’ve also seen this rumour filling the pages from the Portuguese media in October.

It was now claimed that the Toffees remain interested in the Colombian star, and now had even more positive reports from the scouts who have been keeping an eye on him.

However, if Everton are planning to have Diaz for the final part of the season, they may find a lot of resistance from Porto’s end.

A piece from newspaper Record claims that the striker ‘will not leave in January’. That’s a column from Henrique Pinto, who claims that club president Pinto da Costa knows the Dragons will be too weakened if they let their star go now. 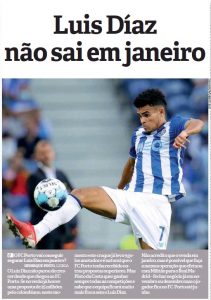 Henrique Pinto points out that offers of €25m were made for Diaz in the summer, and now with nine goals this season, it’s ‘natural’ that he already has bigger bids on the table.

However, even in case Porto agree a deal now, the columnist believes Pinto da Costa would do something similar to the sale of Eder Militão, who agreed a move to Real Madrid for the end of the year and only signed for Real Madrid in the summer.

Maybe something for Rafa Benitez and the Everton board to think about.