Once we saw that Everton were one of the clubs who had a scout watching Porto’s 1-0 win over Milan on Tuesday night, we featured a story saying the Toffees had the chance to see from close a match winner from Luis Diaz, with whom they got linked in the summer.

Now as the Portuguese media is full of articles about the Dragons’ star, we see that interest being mentioned once again.

One of the pieces come from newspaper Record. They take the list of clubs who had scouts in Porto on Tuesday, with Everton included, and say those clubs ‘certainly took good information’ about the striker.

The outlet adds that the Dragons will not listen to any offers that are below the €80m from the player’s release clause.

Meanwhile, newspaper O Jogo has a story about Diaz’ impact at Porto when compared to his compatriots Falcao Garcia and James Rodriguez. 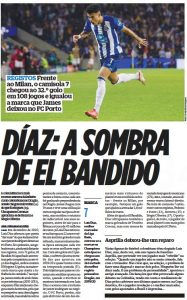 Speaking of the midfielder, the outlet recalls that when Everton were interested in Diaz in the summer, the Toffees ‘waved’ with the inclusion of Rodriguez in the deal.

Even though it had been previously said that Porto had no interest in James’ return, it’s now said the Dragons were actually more preoccupied about not losing their striker.

The Dragons are very happy with Diaz’s form, and signing him in the coming windows will undoubtedly be a tough quest for any sides who are interested.

“The priority is renewal” – Agent denies contacts for Chelsea player,...