Everton and Southampton have been dragged into the Yann Karamoh situation again, with their interest not yet seeming strong enough for the fuss around them.

On Tuesday Saint-Etienne and Caen found an agreement for the transfer of the player, report L’Equipe, and, failing anyone else coming in and gazumping them, the 19 year old striker will be moving for a fee of around €8m.

Someone could still swoop in, and the French newspaper claims Everton and Southampton are ‘watching’ the situation. If either club were very interested in the player then they’d certainly be able to do more than watch, especially with the potential fee at €8m.

Should that watching turn into an urge to actually do something, then Everton and Southampton will have to be quick because Saint-Etienne will be looking to wrap this one 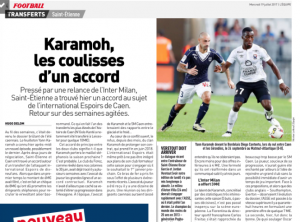 up without too much trouble.

Maybe Everton and Southampton are just named for drama.

There was a period when Mauricio Pochettino moved to Tottenham and took his French scout with him that Spurs and Southampton were repeatedly linked to the same French players.

Southampton recruited a new French scout and were suddenly linked with half of Ligue 1. As for Everton, they’re linked to everyone.