It looks like Everton are the latest club to join the race for the Barcelona goalkeeper Jasper Cillessen.

The claims come from the Portuguese press today, who have been following the player’s situation for a while, since Benfica were interested in signing him this summer.

But now newspaper A Bola says the Eagles have given up on Cillessen, as the Dutchman is interested in joining a top league, which rules out a move to Portugal.

Regarding Everton, A Bola says that the club ‘have already shown interest’ in the goalkeeper, having contacted SEG, the company who manages his career. 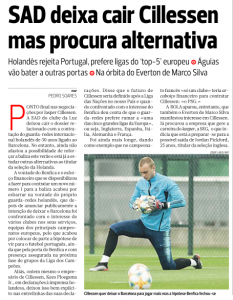 A Bola writes that by doing this, Everton are preparing themselves for the possible departure of Jordan Pickford.

Cillessen has recently made public his wish to leave Barcelona. The goalkeeper has made only 11 appearances for the club this season, and is looking for a new challenge.

Reports from the Portuguese press have been saying that Barça demand €20m for the goalkeeper.

Or could it be for Cillessen? If so, where does England’s first choice goalkeeper go? It’s not like any team in the top six need a goalkeeper these days.