Djibril Sidibé is very fortunate to find himself in the France squad.

That’s the slant of an article from L’Equipe on Tuesday and it’s difficult to put an argument up against it.

The fullback has been struggling to get into the Everton picture this season, so to receive a recall from Didier Deschamps is an unlikely boost.

Léo Dubois’s injury is the reason for the need, with the right back injured whilst playing for Lyon against Saint Etienne at the weekend. Even so, it was a long way from being obvious that Sidibé would be the replacement chosen by Deschamps on Monday.

L’Equipe point out that the Everton player’s experience with the national side will likely be seen as an advantage, and Deschamps’ ‘group management’ is considered key. 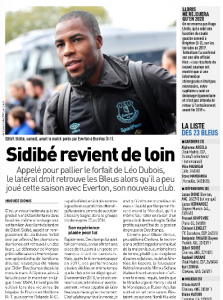 each position, preferring to keep at least one eye on maintaining a harmony within the squad and keeping a good feeling going.

France have had issues with squad dynamic in the past, and Deschamps’ group plan did well enough to win the World Cup, so he’ll likely continue it.

That, this time, is very much to the benefit of Sidibé.