Arkadiusz Milik has been involved in a huge transfer saga over the summer, with many twists and turns. First he was set to join Juventus, and then when they decided on other options, AS Roma became the main possibility for the Napoli striker.

His agent was spotted negotiating the deal and it was all thought to be agreed, before falling to pieces at the last minute. Given he’s now got less than a year left on his contract, the Naples club are keen to sell and avoid the chance of him leaving for free next summer.

A couple of days ago, we covered claims from Italy which stated Napoli had been in contact with the Toffees to see if they’re interested. Tuttosport now reports Everton are ‘convinced’ on the player, and prepared to pay the €25m the Serie A club are asking for.

That may be kicking the deal further along the road than it actually is. There’s a chance the Merseyside club could get him for cheaper, and they’d certainly try that first, and also worry about the level of wages Milik has been asking for. 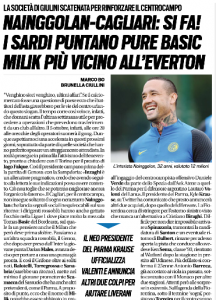 Tuttosport suggest that if Milik does arrive at Goodison Park, that could free up Moise Kean for a return to Juventus.