Leeds United haven’t given up in their pursuit of Erick Pulgar, reports Sunday’s edition of La Nazione.

The Tuscany newspaper says Fiorentina are set for a ‘decisive week’ with several outgoings possible. Pulgar is one of the players they want to keep, but Leeds could change that situation.

As it stands, the Premier League club are ‘ready to jump’ with a €12m offer, and the suggestion is that figure isn’t enough to convince the Serie A club. However, if Marcelo Bielsa’s side can up that to €14/15m then ‘anything can happen’.

That looks like a pretty heavy hint that €14m could be enough to secure the midfielder. Now it’s down to Leeds to get to that amount, and do so quickly so Fiorentina then have time to get themselves a replacement in.

Claims in Chile have been very confident on the 26-year-old moving to Elland Road this window, with it reported that’s why he was set to miss Saturday match against Inter Milan. 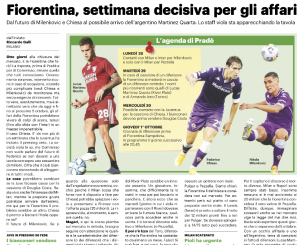 However, it Italy the slant has been that he’s still recovering from the impact of Covid-19. Fiorentina announced on September 7th that Pulgar was no longer testing positive for the virus and could return to training, yet he’s not ready to play yet.

‘By Tottenham in particular’ – Conte a huge fan of player, could be ‘sacrificed on the altar’ this summer

‘By Tottenham in particular’ – Conte a huge fan of player,...

“It would have been great fun” – Manager looking to reward...