Everton midfielder Davy Klaassen has told the Dutch media he’s struggling to understand the Scouse dialect, following his move to the Merseyside club.

The Netherlands international recently signed for Everton from Ajax, after thirteen years with the Dutch giants.

Speaking to De Telegraaf, Klaassen was asked how he’s adapting to his new surroundings in Liverpool, and the differences to life in the Netherlands: “The only thing that’s a bit different for me is driving on the left. And, on the other hand, the dialect in Liverpool, which they call Scouse, is sometimes difficult.”

Last month Klaassen joined Everton on a five year deal for a fee in the region of £23m. 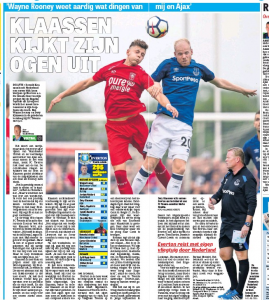 The Dutchman is one of a number of players to arrive at Goodison Park this summer as Ronald Koeman continues to bring in new recruits ahead of next season.

Everton have already brought in the likes of Wayne Rooney, Jordan Pickford and Sandro Ramirez with more likely to arrive in the coming weeks.

De Telegraaf inevitably asked Klaassen about Rooney, and the Dutchman has been impressed by the transfer: “We are talking about a world star. I thought it was great when I heard that he was coming here to strengthen us. He looks fit and can play football so well.”

Klaassen’s next move is to get his own house in the Liverpool area, telling De Telegraaf he can’t wait to settle down.