As things stand, it appears that Youri Tielemans’ next step will be Monaco.

The young prodigy showcased his ability on the biggest of stages recently by performing admirably against Manchester United in the Europa League, but a move to a bigger club appears to be off the cards for now.

After all, the player himself admitted he needed to be careful regarding his next move, with a club like Everton the ideal destination.

And it seems the Toffees heard his call, with Sport/Foot in Belgium claiming Ronald Koeman’s side have even made a bid for the young 19-year-old. 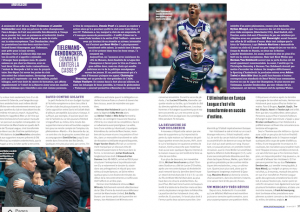 Represented by Christophe Henrotay, one of Belgium’s most powerful agents, Tielemans’ ability on the pitch appears to have convinced Bill Kenwright to send a €25m offer to Anderlecht to acquire his services.

Kenwright is known to be close to the agent, having used his services in the past to acquire players such as Kevin Mirallas and Marouane Fellaini, who was once represented by Henrotay’s father.

However, Sport/Foot make it clear that of the two sides, Monaco have the upper hand, most likely due to their guaranteed appearance in next season’s Champions League campaign.

With the sales of some of their key assets in the summer, the Ligue 1 club should have the money to match Everton’s bid without too much trouble.

Still, nothing is signed yet, and the Toffees could still get their man.

Player ‘trying to push through’ move to Manchester United – Agents...