The Borussia Dortmund youngster has failed to agree terms with Inter Milan, and the Turkish newspaper have mentioned Everton among interested clubs.

Fenerbahçe president Aziz Yildirim recently confirmed his side had submitted a loan offer for Mor, and the club are currently waiting on Borussia Dortmund’s decision. Fanatik have claimed clubs like Zenit and Everton are also in the mix to sign Turkish youngster Mor.

Fanatik say Everton manager Ronald Koeman is chasing Mor due to the long term injury to Yannick Bolasie. The winger isn’t expected to play for Everton until Christmas at the earliest, and the Turkey international could be brought in to fill the void left by the former Crystal Palace player.

Everton supposedly being keen is of big interest in Turkey, with Emre Mor being a rising Turkish star and the Premier League the best stage. 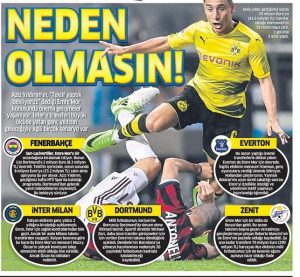 Mor played a starring role for the Turkish national team at Euro 2016. Despite their early elimination, the 19 year old’s performances earned him fans around Europe.

During his debut season Mor failed to make any real impact at Dortmund, and with his move to Inter Milan collapsing, other clubs are being brought in… including Everton.