It’s certainly not been one of the strongest Everton rumours of recent months, not even when restricted to the Catalan press, but it pops up every now and again, usually related to Espanyol’s worry over the situation.

Barcelona’s other club are worried that Lopez, a very important player for them, could be tempted to leave. This has been an ongoing situation, as has the idea of giving him a new contract.

Everton, Valencia and Real Betis are keen on the player, report Mundo Deportivo, and it’s explained that could ‘shake the stability’ despite Lopez being content where he is.

The clubs are ‘more than interested’ but none of them have yet been willing to match the player’s €40m buyout clause. Espanyol are playing strong, insisting they’ve already had offers for less and knocked the approaches back. 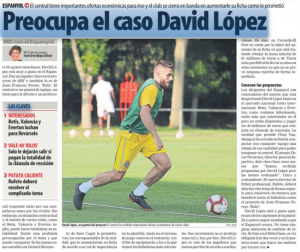 However, it remains to be seen what happens if a club really tests things, by offering something like €30m plus bonuses.

Lopez is 28 years of age and last season played mainly in central defence for Espanyol, but he can also play as a midfielder.