Everton are interested in Barcelona’s Martin Braithwaite, according to Sport.

The La Liga winners signed the forward from Leganés outside the transfer window for €18m and their idea was to increase the Denmark international’s valuation with a view to cashing in during the next transfer window.

However, the Catalan club’s plan for the 28-year-old suffered a blow due to football being suspended across Europe after the Coronavirus outbreak.

The newspaper claims the Blaugrana are in a ‘dilemma’ with regards to the former Middlesbrough man, who is well aware his time at Camp Nou may end soon.

It’s claimed Braithwaite could end leave the Camp Nou if Quique Setién’s side receive a ‘good proposal’. The report, however, makes it clear the figure cannot be ‘less than €18m’.

Although the attacker has awakened interest from Everton and West Ham United, Sport states the Coronavirus crisis has now ‘paralysed these options until they know what the club economy will look like this summer’.

Barcelona’s sporting leaders don’t rule out any option as they consider various scenarios for Braithwaite.

With Everton said to be already interested in the player, Barca will not rule out the sale so that they can recover part of the investment they made to sign him. The other option is to include him as a part of a swap deal. 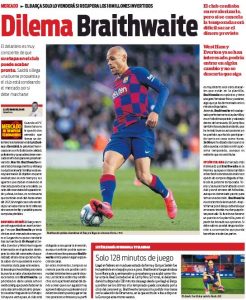 Although Braithwaite is drawing attention from Torino and Sassuolo, the Premier League remains the ‘most interested’ market for him.

Whether he will join Everton, West Ham or any other English club in the summer remains to be seen.