It’s been a while since we heard about Max Kruse. Over a month in fact.

The German forward, currently at Werder Bremen, was, for a good couple of weeks, a reported target for both Everton and West Ham, with a little bit of Southampton thrown into the mix just to spice things up.

However, that interest died down fairly quickly, pretty much disappearing, until today.

Funnily enough, it isn’t the German press who revive it, but the Italians, with Il Messaggero including Everton and Liverpool in Lazio’s hunt for the 29-year-old. 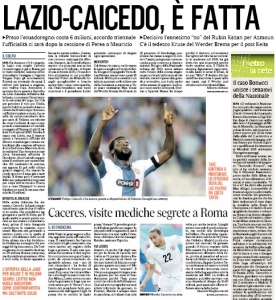 The Serie A side are looking at players who could replace Keita Baldé in Simone Inzaghi’s side, as the Senegalese forward tries to force his way out, and the German forward is a surprise new addition to the list.

The Italian newspaper explain that on top of Lazio, Everton and Liverpool have both been tracking Kruse for a while, and for good reason.

Capable of playing through the middle or down the left, much like Keita, the 14 times capped German international scored 15 goals and picked up seven assists in 23 league appearances last year, and with a contract expiring in 2019, wouldn’t be all that expensive.

Il Messaggero reckon a fee of around €15m should do the trick, which would be a bargain for Premier League sides, but with Jürgen Klopp already swimming in versatile forwards, perhaps a move to Anfield can be ruled out?

As for the Toffees, well, Ronald Koeman is still looking for that Lukaku replacement, and while Kruse isn’t exactly the same profile, he certainly knows where the back of the net is.

Manchester United have made €55m bid for player – Deal ‘remains’...

West Ham talks for forward yet to ‘come to fruition’ –...